A handful of the firm’s offices began using SafeSend Returns on a trial basis leading up to the fall deadlines in 2017. After seeing the ecstatic response of their people using the software, they adopted SafeSend Returns as the default method for delivering returns and collecting signed Forms 8879. “If we have an email for the client, it’s going out that way,” says Cindy Redmond, a tax strategic business analyst at Rehmann.

Redmond says the firm follows the best practice of keeping partners out of the process. Signers review returns before they’re assembled. From assembly, returns are sent straight to the clients rather than going back to the signer.

“The signers love it,” Redmond says. “Once they review a return, it’s off their desk and out of their mind.”

Rehmann’s professional staff are fans as well. SafeSend claims that clients of SafeSend Returns have reported that it takes, on average, four to five minutes to assemble and deliver a tax return through SafeSend Returns and Redmond says those numbers are consistent with the results Rehmann’s professional support staff have realized. Right off the bat, they were able to reduce the time it takes to process a return to seven to ten minutes rather than the 25 to 30 minutes it usually took. “And that’s when we just started using it,” Redmond says. “Now that our team is used to it, they’re processing returns within five minutes.” 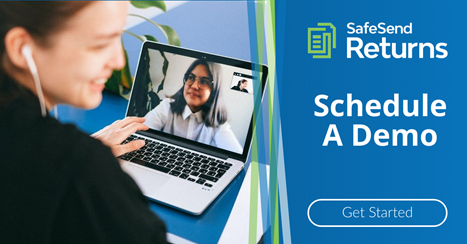 Connect with Us on Social Media